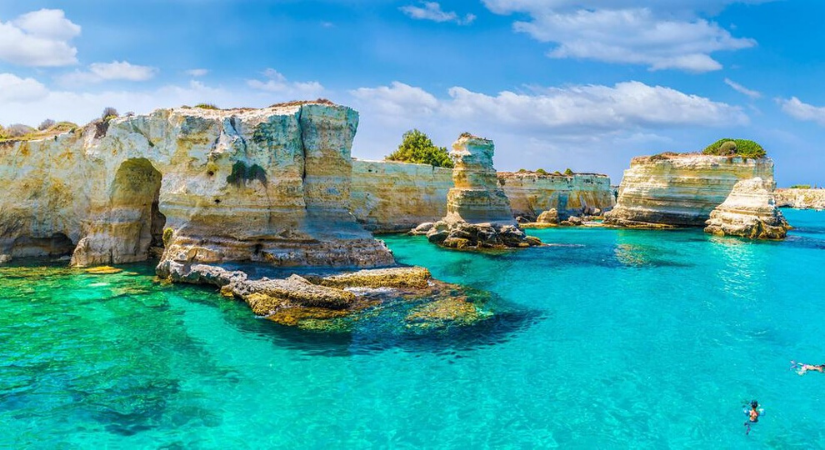 Our estate, located in Frassanito, in the municipality of Otranto, allows you to easily reach the most beautiful seaside resorts of Salento.

To the south: the beaches of Alimini, Baia dei Turchi, Otranto, Baia delle Orte, the splendid bay of Porto Badisco, S. Cesarea Terme and Castro, up to Santa Maria di Leuca, where you can admire the meeting of the two seas, Ionian & Adriatic.

Instead to the north: Sant'Andrea with its faraglioni, the bay of Torre dell’Orso with the characteristic two sisters, Roca, to dive into the beautiful Grotta della Poesia and S. Foca.

Visiting Otranto you can easily reach a beautiful sandy beach called Bastioni Beach, because it is located at the foot of the beautiful and imposing walls of the Aragonese Castle.

Very crowded in high season, it deserves to be visited for the panorama it offers.

Not far away you will find La Punta, an area that stretches between sand and rocks, where the blue sea extends as far as the eye can see, a real oasis of tranquility.

Some of the most beautiful beaches are a few kilometers from the center, however, and you will need a means to reach them and enjoy the breathtaking spectacle that they guarantee.

Moving in the direction of Lecce you will find the Bay of the Turks with its characteristic pine forest in which wind paths that lead to the cliff of tuff and the beach. A real spectacle of nature, just 7 km from Otranto.

Another area characterized by rock faces and large rocks is certainly that of Torre Sant'Andrea, where you can explore the beautiful coast dotted with stacks.

The Alimini Lakes also offer a coast to discover, which you can access thanks to a strip of sand formed right between the two lakes.

Finally, if what you are looking for is a Caribbean postcard landscape, what you need to do is reach the beautiful beach of Torre dell'Orso.

Heading towards Santa Maria di Leuca you will come across one of the wildest and most unspoilt places in the whole of Salento: Baia di Orte, a real paradise surrounded by nature just 4 km from the city.

In addition, a short distance away, you will find Porto Badisco, with Punta Scuru and Capo Palascia, two other beautiful beaches worthy of note. 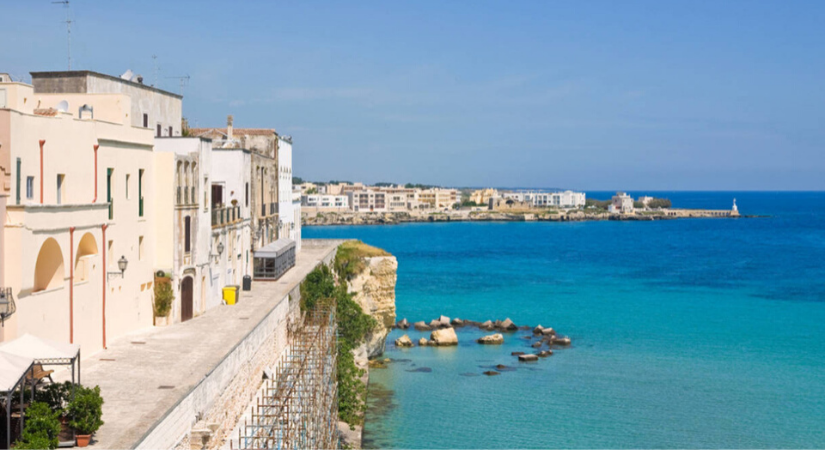 Let's talk about the beautiful city beach of Otranto, overlooking the large and beautiful bay that opens onto the coast.

It is a long strip of sand surrounded by rocks and concrete terraces, which winds along the rocky coast in the shade of the ramparts of the Aragones Castle and, to get to a larger beach in the middle, under the large travertine terrace, shaded by palm trees that surround the bay.

An area characterized by clear and very fine sand, protected by high cliffs, where the shallow bottom gives a transparent water with shades of an intense turquoise color.

In addition, next to the beach, you can admire the beauty of the marina of Otranto, where you can also leave for excursions and boat trips. 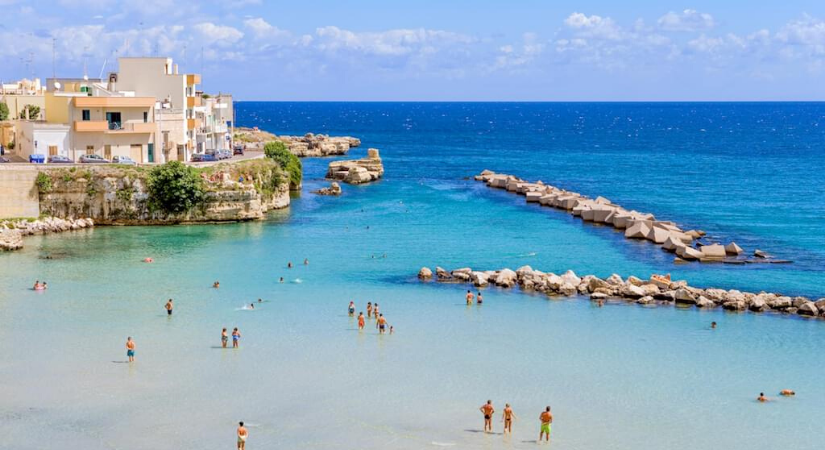 La Punta is one of the most beautiful beaches that can be found along the wonderful coast of Otranto. 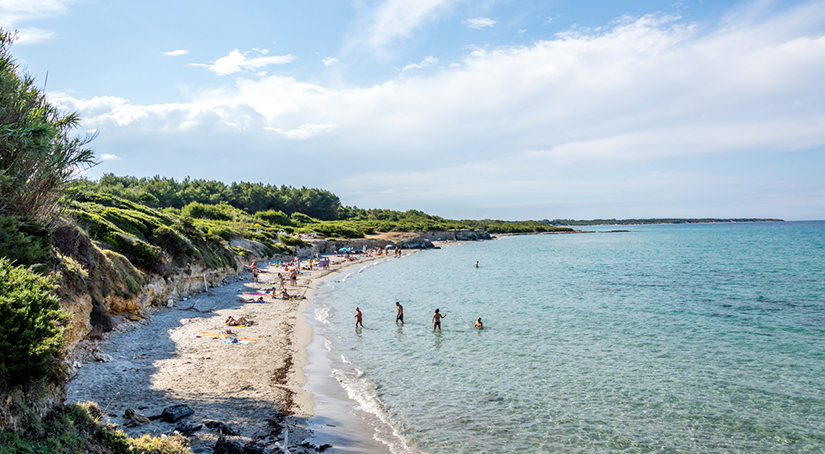 Located a few kilometers north of Otranto is the Bay of the Turks, a place where, according to tradition, in the fifteenth century landed the warriors of the people of the same name during the famous siege of the city.

The bay is part of the protected oasis of the Alimini Lakes, one of the most important ecosystems in the whole of Salento. It is a sandy beach, bordered by imposing limestone rocks and surrounded by a cliff veiled by emerald Mediterranean scrub. T

his is why it is a wild place, which enchants with its clear waters and its hypnotic colours, similar to those of a Caribbean landscape.

Just below the Bay of Turks you will find an area of natural pools, among which we recommend the Caletta di Toraiello, here, thanks to a drone, has recently been discovered a new natural pool hidden between the rock and the vegetation. 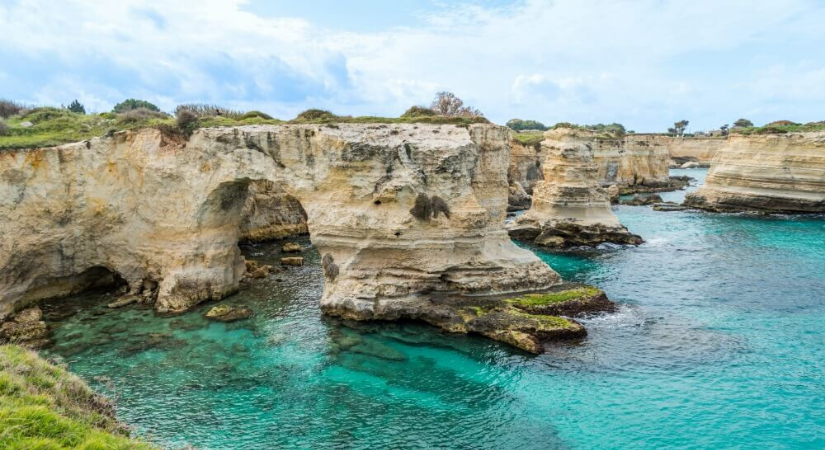 Torre Sant'Andrea is an ancient fishing village located a few steps from the village of Melendugno.

Here nature is the real protagonist: you will find yourself in front of an uncontaminated landscape, characterized by cavities and protrusions, with hidden caves and intimate recesses.

The beach is surrounded by imposing rocks, the so-called stacks, which proudly emerge from the emerald blue waters giving a breathtaking view. Real natural works of art, from which the most daring try acrobatic dives.

The most striking of all the stacks is undoubtedly the arch-shaped one called Arco degli Innamorati (Arch of the Lovers), through which you can swim or sail during the days of calm sea.

Behind this cove you can also find a beautiful pine forest that will lead you to the Alimini Lakes through green paths that wind through the dense vegetation, along which you can come across small and intimate beaches that emerge only with the retreat of the tide. 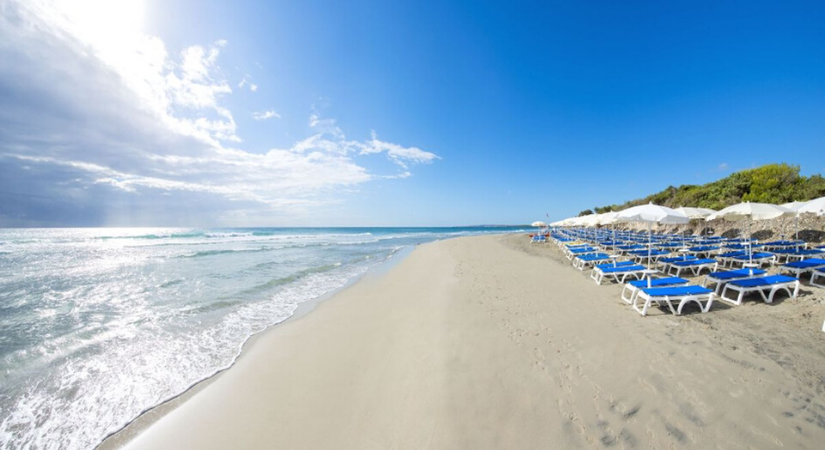 To the south of the promontory of Torre Fiumicelli is the Spiaggia degli Alimini, an oasis protected by the great natural value located north of Otranto, on the border with the Bay of the Turks.

The beach is given by a long strip of golden sand, sheltered by the shade of the thick pine forest that surrounds it and provides relief from the summer heat of Salento.

A long strip of land surrounded by green Mediterranean scrub connects it to the two Alimini Lakes. 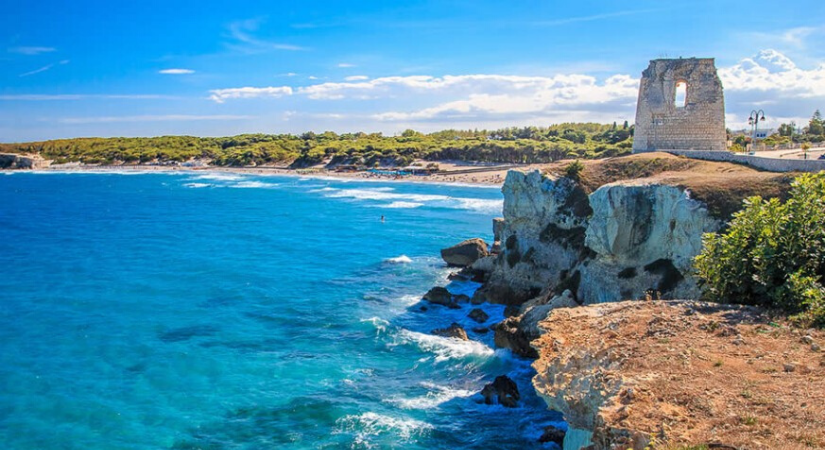 Among the many things, Torre dell'Orso is famous for the curious shape of its bay, a crescent that fits perfectly between rocks that drop sheer to the sea and fine silver sand that gives life to small dunes, creating Caribbean scenery of rare beauty, immersed in the blue of a crystal clear sea from which emerge powerfully two characteristic stacks renamed as "the two sisters"; by the locals.

A short distance from the beach you can reach the beautiful Cave of San Cristoforo, a cave excavated from the rock with rudimentary tools in the fourth century, which contains inside precious engravings and epigraphs in Greek and Latin. 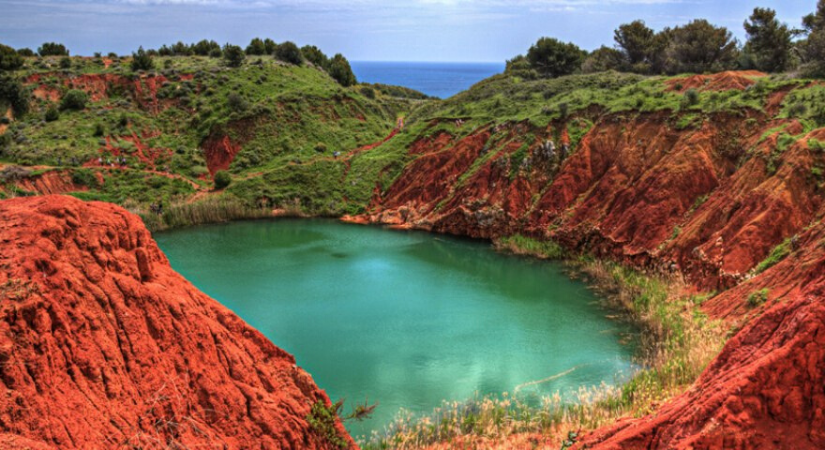 The beautiful Bay of Orte is located south of Otranto, at the foot of the promontory of Punta Facì. It is a beach formed by low rocks that slowly descend towards the sea, diving into the turquoise waters of this beautiful sea.

Moving inland, always in this area you will come across another wonder: the picturesque lake of Bauxite, formed by a water table in an abandoned quarry now. 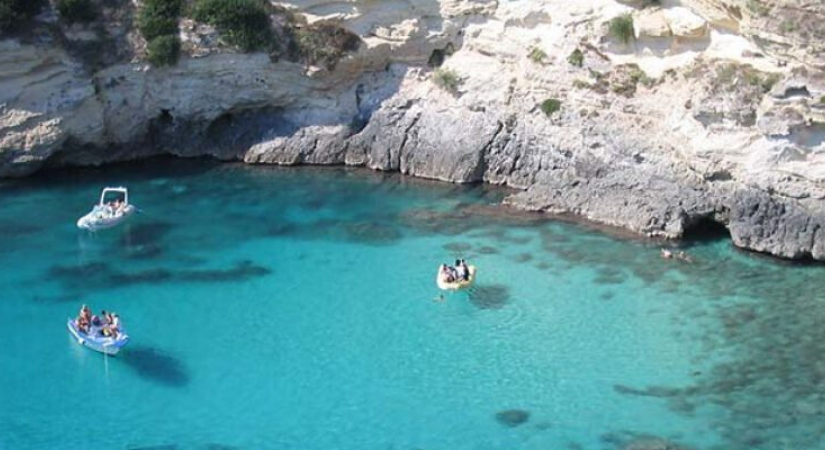 Also south of Otranto you can admire another beautiful beach of the Salento coast: Porto Badisco, a magical cove where the emerald waves break on a strip of fine golden sand. Along the bay you can stop and admire the view on one of the beautiful natural terraces and concrete, from which you can also perform acrobatic and brave dives.

The area is also famous for the presence of beautiful caves that deserve to be explored, such as the cave of Porto Badisco, the Grotta Funeraria and the Grotta dei Cervi. 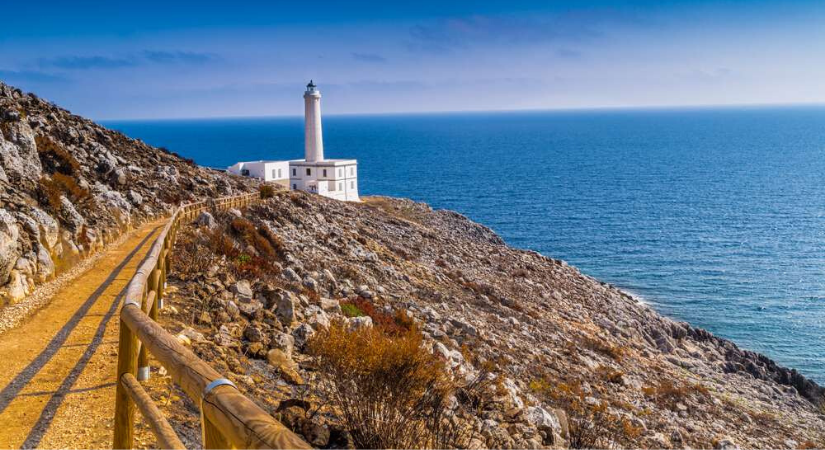 Punta Palascìa, also called Capo d'Otranto, considered the easternmost point of Italy, is famous for hosting on its coasts one of the five most important lighthouses of the Mediterranean Sea, which overlooks an incredibly clear and blue sea, imposing, among the green of the steep cliff.

Moreover, according to nautical conventions, this is the place where the Ionian Sea and the Adriatic Sea meet. 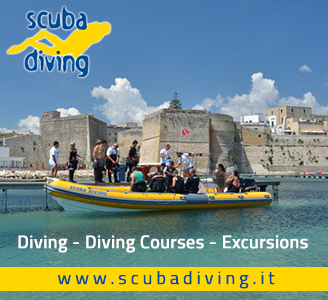 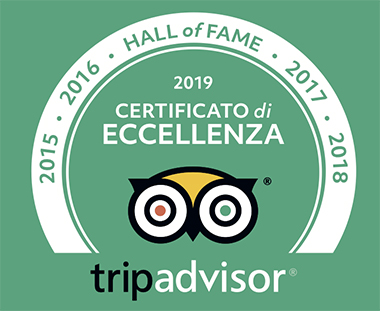